Looking Back and Looking Forward

As I’ve started to look ahead to plan the topics for the IRB Connection Newsletter in 2017, I’ve been reflecting back on the newsletters we published since I took over as editor in January 2016. We’ve covered such a wide range of topics that, while you may not have been interested in every single article, I feel confident that over the past year there was something for everyone.

I especially want to recognize and thank our Human Subjects Office staff authors.  These newsletters have definitely been a group effort.  Eleven staff members wrote a total of 51 articles in the 10 newsletters that we published this year. We had no shortage of topics to cover and they did a fantastic job of providing concise yet thorough exploration of many different topics.  The newsletters this year covered a wider variety of topics than we were able to cover in our previous newsletter format.  We hope you have enjoyed the functionality of Campaign Monitor; the newsletter platform we began using in the fall of 2015.  This new format let us provide much more in-depth content than we could in a 2-page pdf document.  This past year:

You can always access past issues of the IRB Connection from the Education and Training page and by using the ‘search’ field on the Human Subjects Office web site.

Looking ahead, we are planning article topics to reflect the diversity of research activity and experience levels among researchers that submit to all three University of Iowa Institutional Review Boards (IRBs).

We invite you to take a few minutes to share your feedback about the 2016 newsletters and to suggest topics you’d like for us to cover in 2017.

The IRB Connection Newsletter is intended to be an educational resource for all UI faculty, staff and student researchers and for all researchers at the VA Health Care system.  It is for biomedical as well as social/behavioral/educational researchers.  We want the content to be useful for brand new as well as experienced investigators and study coordinators.  Please help us create an IRB Connection Newsletter that is everything you need for it to be.

Topics that are already on the list for 2017 include (1) a monthly (or bi-monthly) article about single/externals IRBs in a question and answer format, (2) enrolling children in research, (3) incidental findings, (4) the reasons we ask for certain information in the HawkIRB application, and possibly (5) the revised federal regulations for the protection of human subjects (as soon as they are approved by the 18 federal agencies that follow the Common Rule, 45 CFR 46).

Thanks for reading!  We’re looking forward to providing timely and useful educational resources to all of you in the year ahead. 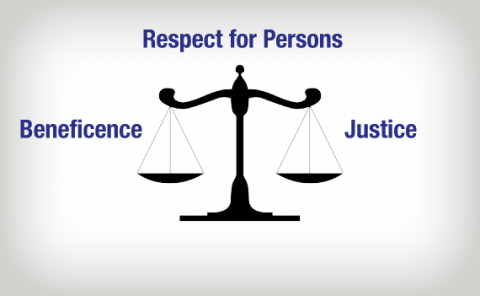 Published in 1979, the Belmont Report is the key document establishing a foundation of ethical research on human subjects. It notes the difference between ‘research’ and ‘practice’ and also outlines the three primary ethical principles for activities that meet the definition of human subjects research.  In a series of three IRB Connection Newsletter articles we are exploring these three principles:

In December 2016, part 3 will conclude the series and cover the ethical principle of Justice and its application to human subjects research.

The ethical principle of Justice can be summed up in a simple question: who receives the benefits and who bears the burden? Justice is concerned with what is fair and unfair. As it pertains to human subjects research, justice requires that participant selection be fairly distributed amongst the population. This means that no one group, population, or class of people should bear the burden of research alone without proper justification, and that the possibility of benefits in research should also be fairly available as well.

There are examples of violations of the ethical principal of Justice in human subjects research in the past. Many unethical studies in history put groups in society at risk simply because they were devalued by society at the time, or were already vulnerable. The Tuskegee syphilis study is a famous example of this. The subjects of the Tuskegee syphilis study were all underprivileged African-Americans that knew very little about their condition. The lead researchers capitalized on their lack of knowledge about syphilis and medical treatment in order to lie to them about their condition. This allowed the researchers to study the untreated progression of their disease for around 40 years. This would be a grave violation of Justice by today’s standards. There were individuals of all races and socioeconomic levels with syphilis who would have been able to participate in the study, but researchers chose to study a group that they saw as “lesser than” to bear the burden of participation. The syphilis study was not the only example of this type of violation, however. In America alone, there were countless other studies that disproportionally burdened prisoners, people in asylums, orphans, and other members of society seen as unvalued. Eventually, public outrage about these studies led to the National Research Act, which led to the publication of the Belmont Report specifying the ethical principles for conducting research involving human subjects.

It should be noted that researchers are not banned outright from conducting research with people who are economically or educationally disadvantaged, people of color, or even prisoners. But upholding the principle of Justice in research means that the inclusion of these subjects to the exclusion of all others must have a scientific reason or justification. In some cases, these justifications are required by regulations. For instance, Subpart C of the Code of Federal Regulations for the Protection of Human Subjects (45 CFR 46) puts specific restrictions on the type of research that can be conducted involving prisoners as subjects. Prisoners were once used as a convenient sample, ‘a captive audience,’ for research studies, and researchers were able to conduct research on them that was directly harmful and had no potential for benefit simply because they could. But now, according to the federal regulations for protecting human subjects, prisoners can only be used in a study when the study is directly related to imprisonment, or if there is a reasonable probability that the prisoners would benefit from the study. This will hopefully ensure that such kinds of violations of research ethics will never happen again.

The principle of justice most often comes into play when discussing participant recruitment. Researchers should address the principle of Justice on two levels: social justice and individual justice. Individual justice is concerned with the fair selection of participants, which means that researchers should not simply pick vulnerable or “undesirable” groups for participation in risky research. This ensures that the risks of research are evenly distributed. Social justice is concerned with whether researchers should use entire classes of subjects based on their vulnerability.

In order to properly ensure social justice, researchers should ensure that risky research is not conducted on groups that are potentially vulnerable, dependent, or unable to give free consent when other, less-burdened groups could participate. For instance, if researchers conduct high-risk research with no prospect of direct benefit on children when they could be using adults instead, it may be a violation of the principle of Justice. Researchers should be aware of the principle of social justice and attempt to find less vulnerable classes of persons to bear the burden whenever possible.

In order to address individual justice, researchers should ensure that they are not recruiting solely from vulnerable groups for research. Researchers should justify recruitment from a vulnerable subject group. For instance, researchers may want to study the relationship between extreme poverty and mental health. In this case, it may not make sense to recruit people of all socioeconomic backgrounds, since the results would not address the research question. In this case, researchers would have to justify the recruitment of predominately low-income individuals, to ensure that they are not overburdening a potentially vulnerable group without cause.

Researchers should follow the principles and guidelines in the Belmont Report to ensure ethical participation in research, proper management of risk and benefit, and equitable subject selection. Once researchers ensure these guidelines are followed, they will be well on their way to conducting human subjects research in a manner that protects the rights and welfare of all subjects. 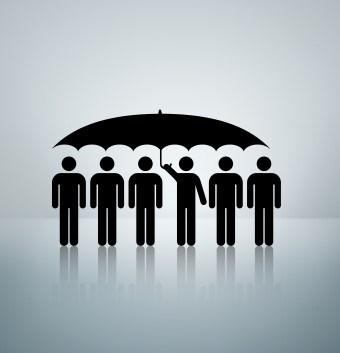 The University of Iowa Institutional Review Boards (IRB-01 or IRB-02) offer an option for faculty or staff members to create a single HawkIRB application, called an ‘umbrella project’, to cover sub-studies with a similar hypothesis and study design that are conducted by multiple (typically student) researchers.  This type of project has nothing to do with staying dry in the rain. It’s based on the definition of an ‘umbrella’ as “a thing that includes or contains many different elements or parts.” (Oxford Living Dictionaries)

The term ‘umbrella project’ can be used to refer to a completely different type of IRB application.  This term is sometimes used for projects that are conducted in waves with slight variations in the stimuli, data collection instruments or the study design with each variation.  The UI IRB uses this term to refer only to a single IRB application where one Principal Investigator (PI) agrees to oversee multiple, similar sub-studies conducted by other researchers.  A HawkIRB application generally does not meet the UI definition of an ‘umbrella project’ if all of the variations are being conducted by the same researcher.

To qualify for this type of IRB application, all sub-study projects typically have similar hypothesis and methodology.  They can vary slightly in their design from project to project, as long as those variations are clearly described in the HawkIRB application and approved by the IRB.  The HawkIRB application must specify the parameters that all of the sub-studies will meet so the IRB can tell whether a study fits under the umbrella or if the researcher must submit a separate HawkIRB New Project application.

The common components of an umbrella project include:

The umbrella project PI must be a UI faculty or staff member. Students cannot oversee an umbrella project.  The PI may serve as the Faculty Advisor of the students conducting sub-studies or those students could have a separate Faculty Advisor who is added as a research team member on the application.  Either way, the PI who submits the HawkIRB application has the ultimate oversight responsibility for research activities conducted by everyone involved with the sub-studies.

All sub-studies for an ‘umbrella project’ must meet the IRB definition of minimal risk: the level of risk should not exceed the amount of risk the subject population would face in their everyday lives.

Sub-studies involving the use of medical record or other existing data may qualify for a waiver of the requirement to obtain and document informed consent from subjects.

Adding and Removing Sub-Studies in HawkIRB

The PI submits HawkIRB Modification forms to add sub-study investigators and related study materials (if any) before the sub-study begins and then to remove these team members and materials when the sub-study ends.  IRB approval is required for all human subjects research activities, including recruiting subjects, collecting data, interacting with subjects or working with data that have subject identifiers associated.

I encourage you to consult with me by phone (319-335-8477) or by e-mail (kelly-oberry@uiowa.edu) if you would like to submit a HawkIRB application for an umbrella project.  Consulting in advance can help to make sure your application goes through the IRB review process as smoothly as possible.